Books and publications by Dezi Jay M are available to buy online, in print and e-book editions

Would You Believe?
by Dezi Jay M 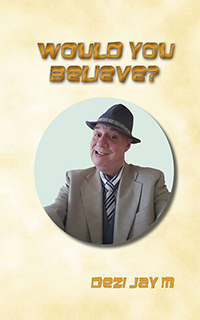 A staggering collection of tall tales, enriched by an exaggerated sense of humour and fun (with not a little bit of word-play thrown in for good measure) that should not fail to raise the audience to a heightened sense of elevated delight, even as it casts a wry look on modern life.

Ordinary characters and how they react to extraordinary situations form the focus. A picture is formed of a world in which everyone has their own problems, perplexities and personal demons to wrestle with, to conquer and to overcome.

The stories told here are meant to make you laugh, make you cry (not necessarily in that order), maybe even make you cringe as you empathise with the various predicaments that the author so unflinchingly portrays. Most of all, these stories are meant to be shared.

The Day the Poppy Met the Shamrock
by Dezi Jay M 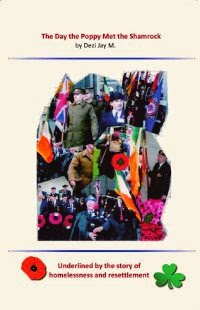 The Day the Poppy Met the Shamrock is a personal account that deals with the problem of homelessness, charting one person's journey from homelessness to resettlement: not just a matter of physical abode but also the deeper, more searching question of finding a home within oneself. God does not close one door without opening another.

Dezi Jay M. grew up in Coolock, Dublin amidst abuse and addiction. At the age of 17, he was treated for compulsive gambling and later alcoholism, which took over his life for a while. He experienced several periods of homelessness, including that following the break-up of his marriage, in 2008.

This is the story of the author's struggle within himself, leading to the epiphany that he experienced on a November day, at a WWI Armistice Day commemoration in the Irish Peace Park in Messines, near Ypres in Belgium. It was an experience that helped him to put his life into perspective. The profound sense of history that he felt on that occasion is described here in absorbingly vivid and moving detail.


"It was a very cold day, though far from the conditions in the trenches during the fighting. With God's grace, I held the Irish flag above my head in the cold for one and a half hours, with the poppy on my heart while a Belgian bishop celebrated Mass. Yes, someone was looking after me; my heart was going in the right direction, releasing a long-held bitterness from my soul."

For the author, seeing himself as a product of the society he was born into, being able to relate his own troubled past to his country's turbulent history, with its still unresolved tensions, marked the turning point in his life. Like all social problems, the issue of homelessness has to be addressed on an individual and personal level. The story does not end there however.


It is also available to buy in e-Book formats: